A Change in Perspective

This past year I have spent more time inside emergency and operating rooms than I have in the previous twenty plus years combined.  Stitches, surgeries, unexpected trips to the ER, pain, and disappointment became the norm. 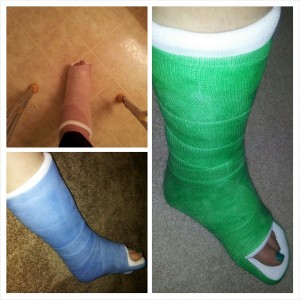 Three of the four casts I have been in this past month.

On November 11th, about two weeks after having Lithotripsy – a procedure done to blast kidney stones – I tore my Achilles tendon while going up for a simple basketball jump shot.   Simultaneously, I heard a loud sound and felt an intense pain in my lower left leg. This may sound dramatic, but in that moment I thought I had either been shot or attacked with a baseball bat.  As I came crashing to the floor, I immediately looked behind to see if I could find answers. When I saw no one, there was no doubt in my mind. I tore my Achilles.

Two days later, I was back in the OR having surgery.  The doctors aren’t sure how long the recovery process will take, but they said anywhere between two to three months.   They also let me know that I was the youngest female with this injury that had walked through those doors. I felt so lucky.

My emotions have been all over the place.  I go from feeling at peace that God has a plan and a purpose in all this, to feeling helpless and surprised by the amount of tears I can muster up within seconds.

Never once, however, did I doubt that I was going to escape this season without learning something.  I’m still not exactly sure what that lesson is, but as I began to shift my perspective to that of the orphan’s, my compassion and burden for their circumstances only began to grow.

Who rushes them to the hospital when disaster strikes?

Who operates on them and then helps when the bills start piling up?

Who checks on them when the pain becomes too much to bear?

The Boaz Project partners with people who seek to answer those above questions with their name. These people go against the grain and give their all to help the orphan.  Their courage, compassion, and sacrifice astound me.

Yes, I hope and pray that I don’t experience another year like this past one for years to come, but thankfully I had people to help me.  Now, let’s continue to equip and find people to help the orphan!