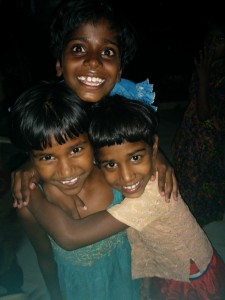 For some, the night is the worst time of the day for them.  Waking up from night mares and being convinced that a man is reaching through the window and touching their leg does not make for a good night’s rest.  As much as I want to, I cannot stay up all night to reassure them that they are safe.

For some, learning English is extremely difficult and no matter how long I spend with them one-on-one, it just doesn’t seem to click.

Yes! God is able and nothing is impossible with Him. I believe that with all of my heart.  If these girls are going to be placed into families, heal from their past, feel like they are safe throughout their entire day, and learn English, it will be ALL because of God.  No matter what good comes of my time here, it has absolutely nothing to do with me.

But I long to be used. I want to be emptied and poured out for these girls. For the sake of the cross and for His Kingdom, I want to make a difference in these girl’s lives.

After praying about this night after night, God showed me that I have what these girls need most: The answer to what truly gives one dignity. I have an understanding of what the Savior of the world did for them because He loved and valued them.  What He did for us because He loved and valued us. And I can share that with these girls every single day.

Two girls that desperately need to know they are loved and valued are Pandimeena and Selvi. 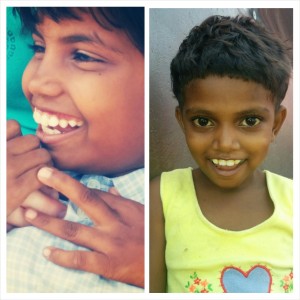 Pandimeena and Selvi are sisters and have lived at Daya Vihar for about a year. Pandimeena is 8 and Selvi is 6 (although no one is certain, since their birthday is unknown).  Their mother died while giving birth to Selvi and then their father tried to kill both of his two beautiful daughters. To my surprise, this landed him in prison.  I’ve heard several stories of little girls being killed, but this is the first time I’ve heard of someone being thrown in prison for it. 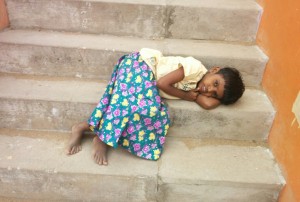 For several years they lived on their own, seeking shelter and getting food at what we would consider a homeless shelter for small children. Sadly, there is a strict 3-year time limit of how long children are allowed to receive aid from this specific place. Once Pandimeena and Selvi’s time ran out, they were forced to leave.

They began to eat mud to survive.

You can only imagine the physical and emotional repercussions this had on their development.  Both of these girls are severely behind in school. Selvi is still not potty trained, her fine motor skills are almost nonexistent, and she hardly ever talks – instead she uses high pitched sounds to get your attention and soft mumbling along with facial expressions to try and communicate what she wants.  Both of their heads are covered in lice and we recently discovered that they have also been suffering from scabies.

Most of the other girls at Daya Vihar do a good job of hiding their emotional scars.  Pandimeena, on the other hand, wears her heart on her sleeve.  She cries often and she would hug you all day long if you’d let her.  On one particular morning, I realized just how severe her emotional scars were.

The teachers here are very rough with the students.  They often hit them, yell at them, and tease them unmercifully.  Within the first month of teaching, I witnessed the after-effects of Pandimeena getting slapped across the face, hit across the back several times, and screamed at in front of the entire school. Pulling her out of school, I took her where no one could see us and just held her as her tears soaked my shirt.

I have held a lot of crying children, but none have broken my heart as much as Pandimeena.  Even if we spoke the same language, there just didn’t seem to be any words to comfort her.  As I silently prayed for her, the words to “Jesus Loves Me” came to mind.  Holding her in my arms, I began to sing “Jesus loves Pandimeena…” and as I did, I began to weep right along with her. 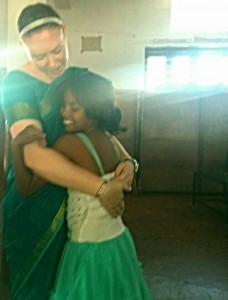 When I had finished singing, I squeezed her tighter and whispered, “Jesus loves you.”  We have been practicing this in English, so she understood and as she heard these words, she began to cry even harder.  It was almost as if she was saying, “I want to believe that! I want to feel loved and like my life has meaning, but all I feel is that everyone would be better off if I just wasn’t here.”

After about 5 minutes went by, I unraveled my arms, knelt down in front of her, gently held her face, looked her in the eye, and said, “Pandimeena, you are loved.  Deeply loved!  Jesus loves you.”  She closed her eyes and a new stream of fresh tears poured from her eyes.

I went back to holding her as tight as I could and began to hear the Lord say, “I have appointed this time for you. This is why it took so long for you to move to India.  Pandimeena needed to hear that she is loved by Me. Please, just keep telling her that I see her and that I love her.”  And so I did.

Ten minutes later, after her crying seemed to stop, I asked if she was ready to go back to school and the tears came streaming back as she shook her head in a panicked state.  In the little English I knew she understood I said, “OK!  Pandimeena wants sit, we sit.  Pandimeena wants school, we go school.” She breathed a sigh of relief.

When she seemed to calm down, I again whispered, “Jesus loves you, Pandimeena.” This time, she looked me in the eye and with a little smile said, “thank you.” For perhaps the first time, Pandimeena truly believed that she is worth loving, that her life has value.

I’m not sure how many minutes we sat there, but they will forever be cemented in my mind as some of the most powerful and significant minutes of my life.  I pray they will be in Pandimeena’s mind as well.

To God be the glory!