Nastya, Your Partner in Orphan Ministry 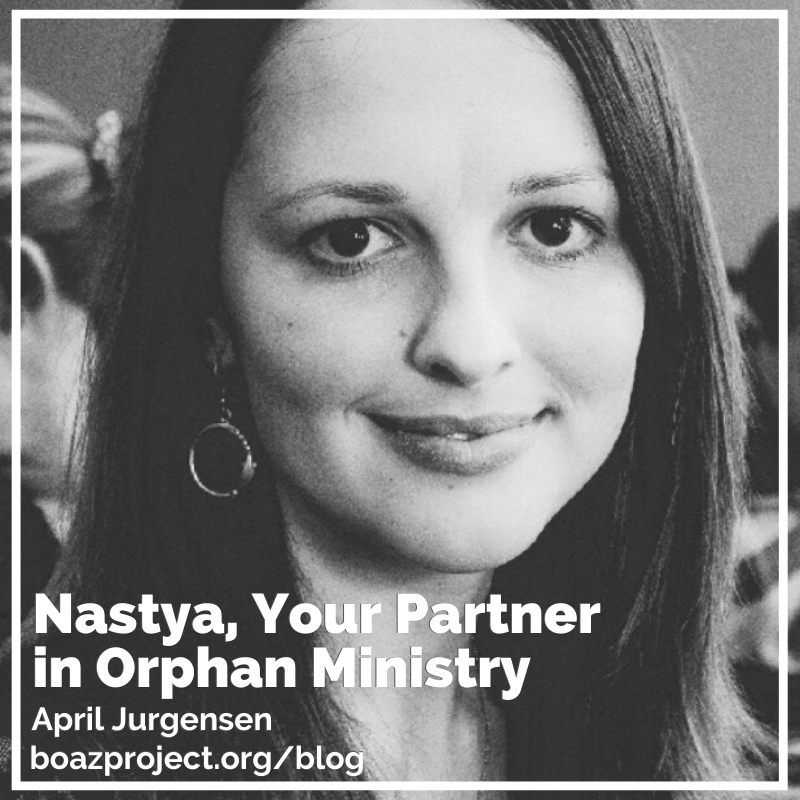 As you know, we believe that the best way to care for orphans is to support those who care for them daily: those saints who welcome abandoned children into their homes or tirelessly go to state-run facilities to be the hands and feet of Christ to them.

Your support of The Boaz Project undergirds these heroes’ ministries and makes them as effective as possible in the roles God has called them to fill.

With that in mind, it’s my pleasure to introduce Nastya to you.

Nastya is our coordinator for Vladimir, Russia. There, she organizes our work in three state-run orphanages as well as our Russian Christian Foster Home. She is also instrumental in coordinating a foster parent support network.

To carry out these goals, Nastya communicates frequently with all of the orphanage directors frequently, to determine their needs and how we can be most effective in helping them. She also coordinates our volunteers who work in the orphanages, giving them the resources and encouragement they need to carry out their ministry to orphans.

In addition, she leads prayer times for those volunteers to pray over their work in the orphanages and any specific requests they receive from the children they serve.

Nastya began working with orphans with another organization while she was still in university. This work was so important to her that she wrote her thesis on orphans and the volunteers who visit them.

After graduation, she worked as a psychologist in an orphanage for a time.

Eventually, she became disillusioned with the type of work she’d done with orphans because it didn’t create prominent or lasting relationships.

After moving to Vladimir in 2014 just five months after getting married, Nasty was working in a kindergarten.  She worked there until this year. “But I still felt I was meant to work with orphans,” she said. “So I started praying about that, that I would be at a job that would let me be involved with them.”

It was shortly after Nastya began praying about this that David and Bethany approached her about the opportunity to lead The Boaz Project’s ministry in Vladimir.

Now she says, “I’m happy to continue the work of The Boaz Project in Vladimir.” She enjoys sharing Bible lessons with the younger children and building relationships with the teens that offer a platform for her to share her faith with them.

Tensions between the U.S. and Russian governments has presented a challenge to Nastya’s work, as some orphanage directors are hesitant to bring in any programs from the United States for political reasons. But that obstacle doesn’t seem daunting to Nastya.

“For me, the greatest blessing of this work is that I feel needed. I’m working with children who need my help, my support, and I can offer that to them,” she said.

She added, “I always feel that God really wants to take care of those children, and there’s no one who loves them and takes care of them more than He does. I feel like I am God’s hands that take care of them. That, for me, is the biggest blessing.”

Of course, the coronavirus pandemic has added some road blocks to her work recently. While the homes remain under quarantine, none of the volunteers are permitted to enter them. Nastya remains in contact with the directors, receiving updates via phone and pictures. One orphanage even allows the children to Zoom with the volunteers because they recognize the value these relationships have to the children.

Nastya also continues to strategize with the volunteers how they can minister even more effectively when the quarantine is over. “I can’t wait for the pandemic to be over so I can visit the children again!” she exclaimed.

All told, Nastya is excited about The Boaz Project’s model for ministry to orphans, believing that the ongoing relationships built between volunteers and orphans are mutually beneficial. She said, “I want to be a friend to the children in the orphanages. These friendships are a great gift!”