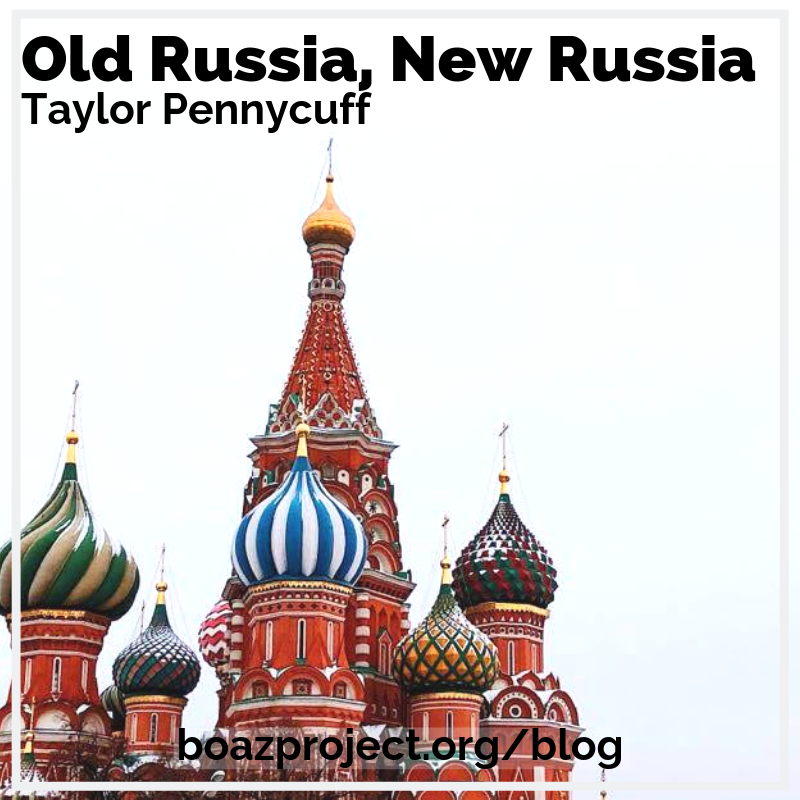 Grey. Gloomy. Quiet. These are some of the ways that I envisioned Russia. Coming off of Soviet ruling in the 1990s, Russia was far from a place of boisterous joy and modern amenities and I assumed that not much had changed in 28 years. I heard stories that made Russia seem bleak and harsh; I looked through pictures of the orphanages and the terrible conditions that existed.

I determined that I would not go to Russia. I did not want to go to a country that seemed to embody what depression would look like if it were a place.

Well, I am writing this 10 days after returning from Russia. Friends, I am so pleased to be able to tell you that the Russia I pictured and feared was not the Russia I encountered. I believe after experiencing the culture, the orphanages, and much more that there has been a shift in Russia. God is up to something and we have the privilege of having a front row seat.

When I pictured Russia, I pictured grey streets lined with grey buildings. What I encountered in Vladimir were streets of cobblestone and buildings that are brightly colored. It’s quaint and cozy. There is a very European feel even when the streets are covered with snow. The brick work of some of these buildings is beautiful. Russia drips with rich history from the cathedrals to the ancient gates but is also met with modernization of the western world. Just across the street from the Dormition Cathedral you can find a KFC or McDonalds, which is quite comical but fascinating to see the stark contrast between the two.

The cute, small shops and wonderful display of lights which were hanging in order to celebrate the holidays began to break through the box I had put Russia in. However, it was the children and orphanages that made me truly realize that Russia has changed and is continuing to change.

I had heard that years ago, the orphanages were a harsh system for the children to go through. It would have seemed that once a child was dropped off at an orphanage, they would never leave. They would be in the system all the way until the age of 18 and then put out into the world to fend for themselves. Yet, they would not learn the life skills necessary to survive.

The children, as you could imagine, were belligerent. They were in survival mode. Bullying, neglect, and abuse were all things that would without a doubt be happening in the orphanages. The abuse would come from the caregivers as well as from the other children. It was nothing short of a hopeless, heartbreaking, devastating place to be.

The stigma of orphans in Russia was evident. An orphan was unwanted by everyone. If a child’s own mother did not want them, why should anyone else?

The Boaz Project has been working in Russia for two decades now. We’ve seen this side of Russia and its orphanages. But now, we are seeing a change.

Some of the orphanages we work in now have a high rate of adoption or reunification with family. The children are surrounded by caregivers who are compassionate and who are seeking the best for them, even helping them realize their full potential.

Partners of The Boaz Project, who are working in our orphanages weekly, have seen major changes in the children themselves. The children’s behavior has gradually changed from one of pure survival, to one of learning and thriving. They are learning skills and have the brain capacity to do so. One of the orphanages that The Boaz Project works in has an “independent living unit” in which teenagers can live and learn how to take care of themselves before they age out of the system. These units are fully functional apartments within the orphanage. The teenagers have the freedom to be “independent” while still under the watch and care of the orphanage.

Within Russia, the stigma of the orphan is slowly starting to change. The foster care system is beginning to make advantages, which is great news for these children.

Of course, the sad reality is while all these great changes are happening, there is still neglect, abuse, bullying happening. Some children aren’t in the system and won’t leave the orphanage until they’re 18. Some will go back to terrible home situations.

It is easy to become upset by these things but we must not forget that God has been and is still moving. God continues to provide a way for The Boaz Project to enter the orphanages through Russian volunteers who visit the children weekly and teams of Americans who travel to spend time with these same children. Long term volunteers and team members have spoken of the huge difference they’ve seen within the orphanages where The Boaz Project works. God has been, is, and will continue to move, we just have to step into His call to see it.

do not dwell on the past.

See, I am doing a new thing!

Now it springs up; do you not perceive it?

I am making a way in the wilderness

and streams in the wasteland.”