What an Orphan Taught Me: Mercy Edition 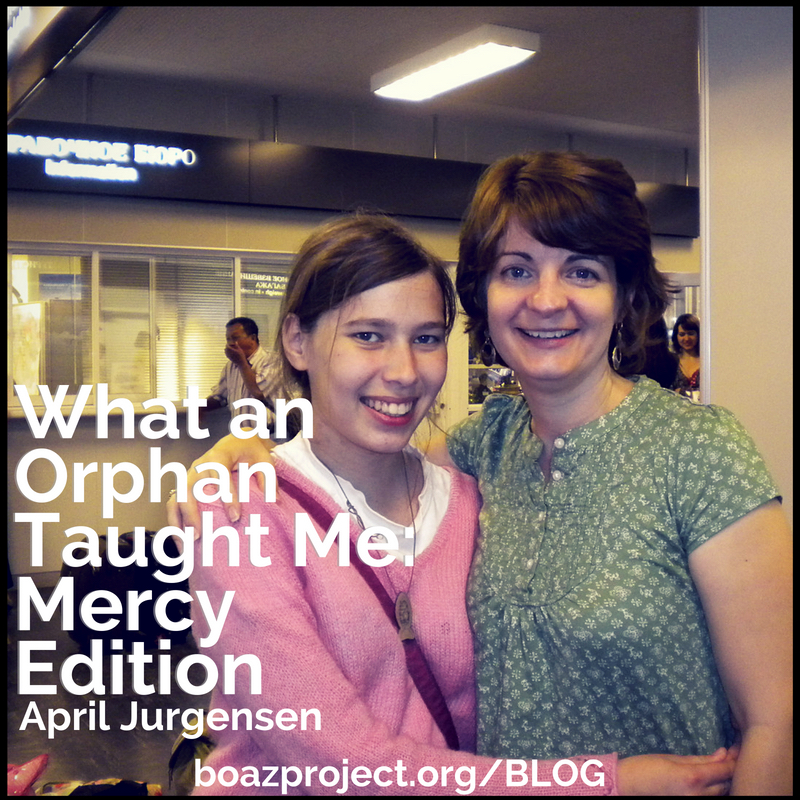 Be merciful, just as your Father is merciful. Luke 6:36

I couldn’t believe God had miraculously reunited us!

Olya and I had spent many hours together when she was growing up in the orphanage. From my first time in her orphanage, she stayed right by me, as if attached at the hip. And every time I returned, it was the same routine: If I went outside to check on the groups there, she came with me. If I were inside, helping a group with a craft, she made one and gave it to me.

Each year, I would return, and Olya would be a little taller and little more mature. But still she stayed by my side, savoring each moment of individual attention.

It broke my heart, but I wasn’t able to visit her region of Russia the year Olya graduated from the orphanage system, and I assumed I’d never see her again.

As state-run institutions, the orphanages are not permitted to give us any forwarding information on the children who leave. So I had no way to find her in the city of nearly 600,000.

But I found myself back in her region, preparing to hold a VBS in the orphanage where she once resided. It was our first full day in country. The team and I had gone to church and were headed across the square in the city’s center toward lunch when a team member said she thought Aksanna, Olya’s sister, had just past us!

I turned in the direction of the passing pedestrians and called out, “Aksanna!”

And right away, a young woman turned around, looking for the person who’d called her name. I began waving my arms wildly so she’d find us. She squinted, unsure of who we were we until she got closer. As she realized it was us, a huge smile spread across her face, and she ran to greet us with hugs. She then waved to the young man who was with her (another graduate we knew from the same orphanage), inviting him to join us.

After exchanging a few pleasantries, I asked about Olya. Aksanna pulled out her phone and called her, speaking rapid fire. Moments later, Olya came running up the street, and we embraced and giggled. I couldn’t believe God had reunited us!

After chatting for a few moments, I invited the trio to join our team for lunch.

Once at the blini café, the others staked out a large booth while Olya and I went to place the order. While we stoodin line, She said to me (in Russian, of course), “I wore your sweater for a long time.”

When she could see that what she was saying didn’t register with me, she said, “Sweater…sweater..”

It wasn’t that I didn’t understand her words.  I just couldn’t remember what she was talking about.  My mind did furious cartwheels, searching all its files for any memory of a sweater.  Then it hit me.

The last day of the last VBS Olya attended at her orphanage, I was torn up about leaving her.  Though language rarely flowed smoothly between us, she had been content for most of the week to sit silently at my side, holding my hand.  Occasionally, she would show me a photo or participate in a craft.  But it was apparent she really just wanted to be near me.  That morning, she had been cold in the orphanage building and had goosebumps.

I took my sweater off and wrapped it around her shoulders.  She smiled broadly, showing her teeth which were much prettier than most of her children’s home compatriots’.  Then she slid her arms into the sleeves.

When it was time to go that afternoon and we were forced to say goodbye, we both had tears in our eyes.  She began to take the sweater off to hand it to me.  I put my hand up, as to refuse it.  I helped her put it back on and tapped her shoulder to tell her she was to keep it.

Clearly, I had forgotten all about that sweater.  Sadly, it was one of too many stuffed into my closet.

When Olya could tell that at last I understood what she was talking about, she continued, “I wore that sweater nearly all the time for so long.  It was my favorite.  But one day, I saw a girl who lived on the street.  She was shivering with cold.  I didn’t want to give her the sweater, but I understood that she should not be cold.  So I gave it to her.”

Olya had not been shown much mercy in her life. She’d been abandoned by both of her parents. She hadn’t really fit in at the orphanage. Classmates treated her like an outcast. But when faced with the needs of another, Olya chose to show mercy, offering what was precious to her to a stranger. At this point, I didn’t know that Olya was teaching Bible classes to children who still resided in the orphanage or that she was sneaking children out to go to church with her on Sundays, but I was confident that she had become a woman of peace, an ambassador of mercy.

This month, as you remember The Boaz Project in your prayers, please ask God: