What Wikipedia Won’t Tell You about Orphans 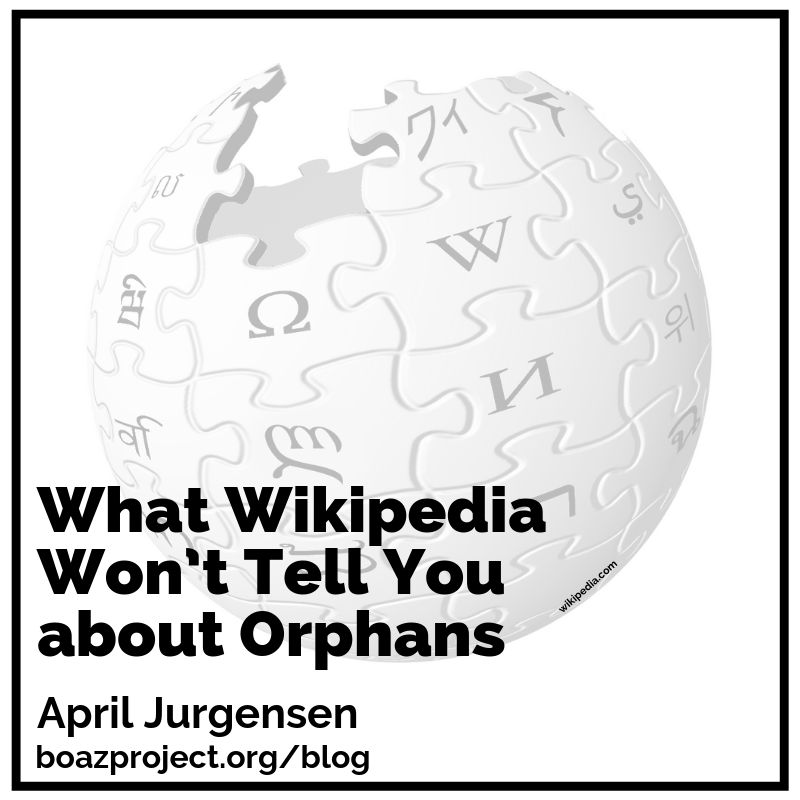 Let me start by saying that I’m not anti-Wikipedia. While I recognize it’s become the brunt of a few jokes and probably shouldn’t be relied upon as the most authoritative voice on all topics, it has its place. For example, when you’re in a hurry and just want a quick overview of a subject, Wikipedia’s not a bad option.

The other day, I decided I’d look up “orphans” in Wikipedia, just to see what it had to say. It defines an orphan as “someone whose parents have died, are unknown, or have permanently abandoned them.” It follows that up with the U.S. legal definition, “a minor bereft through death or disappearance of, abandonment or desertion by, or separation or loss from, both parents”.

Next is a list of statistics from nations with large orphan populations and then the article continues, naming some “notable” orphans, (from U.S. President Andrew Jackson to Moses, the Biblical character) from history, literature, and religious texts.

For the most part, I was familiar with the information, and it all seemed accurate. Still, it left me disappointed. This would be one of those times when maybe Wikipedia isn’t the best source, when scratching the surface won’t cut it, when statistical data is insufficient.

It felt like someone asking a friend of mine, Who’s April Jurgensen?” and her replying, “A married, Caucasian female who just entered her (gasp!) 50’s.”

The statement is true, but almost offensive in all that it lacks. I hope a friend would mention my love for Jesus, my family, and orphans. Maybe they’d describe me as stubborn, wordy, or addicted to coffee. They may tell someone where I live, that I love my alma mater (Taylor University), or that I come from a long line of ardent Buckeye fans. These more intimate specifics make for a much more fitting description.

I know it’s hard to make such detailed descriptions of a group of people as opposed to an individual, but there are some common characteristics I think could be included in a description of orphans. Here are three:

While the circumstances which leave a child orphaned vary, a child growing up without his biological parents has known tremendous loss and grief. Even if he never met those parents and/or has been welcomed into a loving home, he has lost something critical in being denied the opportunity to be raised in his family of origin. Death, neglect, and abandonment are an unwelcome trio who robbed the child from the life that should have been.

This reality affects all orphans to some degree. Many have an ongoing fear of abandonment in future relationships. Some—depending upon their experiences—suffer from PTSD. Most can be described as “survivors” who learned to fend for themselves emotionally and potentially physically.

Just as I’d resent being described solely as a Caucasian female, most orphans don’t want the “orphan” title to be their identity.

Many orphans want to hide their difficult backgrounds, resenting the “pity” that may result or just trying to avoid a depressing topic that seems to follow them.

As a result, they often struggle to prove they have other roles to play, interests, or abilities. Whether it is a passion for nail art, a love for music, a knack for dance, or even an identity as a trouble maker or bully, they’ll gladly accept any title that offers some personality or distinction over the one that simply defines their circumstances.

I know, I know. We’re all created in God’s image and precious in His sight. I don’t mean to deny this truth or take it for granted. But I believe a thorough examination of Scripture will support the theory that orphans have a special place in God’s heart.

The above list is not exhaustive, but I think it builds a sufficient case for the fact that orphans are beloved by God and should be by us, as well.

Maybe Wikipedia’s definition for “orphans” should be expanded. I hope mine will as I continue to pray for, visit, and love them.

-Thank God for a great team that visited India last month, holding a VBS and loving on orphans and their caregivers. Express gratitude for the safety and unity of the team, as well as His favor as they went in and out of immigration.

-Ask God for the necessary funding for the building project in Kenya, offering family-style apartments to orphans and their caregivers.

-Request new contacts for the ministry who will enable us to reach even more children with Christ’s love and provision.

-Lift David Mercier, our Director of Russia Ministries, as he travels at the end of this month to Russia to do administrative work, encourage our personnel, and recruit more Christians to serve in orphanages or as foster parents.