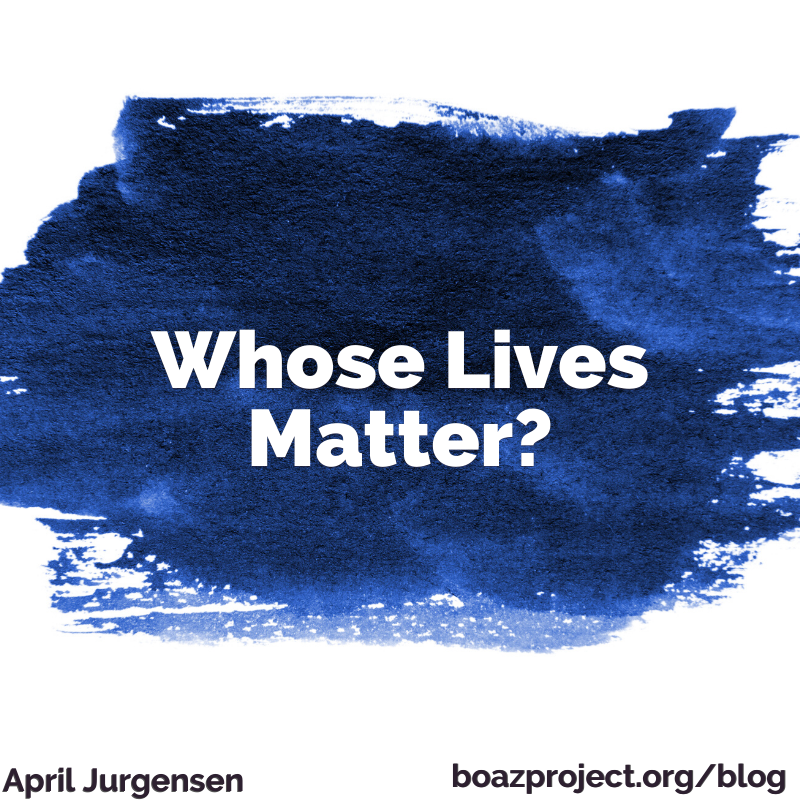 The world is aching, divided, chaotic. A global pandemic and economic crisis have taken a backseat to discussions of systems, power, and injustice. Prejudices are being dissected on TV, social media, board rooms and living rooms. The discussion is both age-old and freshly urgent.

Now, before I get too far into this discussion, some of you may be wondering why I bother, especially on this platform. What do race relations have to do with The Boaz Project?

I would propose they have everything to do with it, because at its core, The Boaz Project is about acknowledging the value and worth of every human life (including orphans who’ve been discarded by family and, often, society) and demonstrating Christ’s love, character, and kingdom to both the vulnerable and the watching world.

From its inception, The Boaz Project has defended those abandoned because of prejudice regarding gender, caste, or medical conditions because we believe Christ came to obliterate all systems of rank we humans have created.

How can we ignore the same systems in our own “backyard?”

I remember as a little girl coming home from school one day, complaining to my mom that some girls had said mean things to me. Mom pulled out the classic parenting line, “They just think by putting you down, it makes them look better.”

I was stumped. How did making me look bad make them look good?

Sadly, this illogical tactic is rarely left behind with childhood. Rather, it is the root of injustice, this assertion that I can keep the privilege associated with my gender, race, or economic status only by taking yours.

To maintain this self-serving facade, I must conclude that “my people” are more capable than “others,” that “we” are less likely to commit crime than “you,” and that “our” lives are more valuable than “yours.”

As a white female, I refuse to pretend I understand all of the nuances to this complex discussion. But I will assert that Christ gave us an example to follow, one that turned the status quo on its head in His day and holds the same power for ours today.

What was Christ’s message regarding those marginalized by society’s systems? Christ was not only inclusive of those society viewed as second class, but He intentionally pursued them, knowing they would embrace His Message and share it.

If this is true, we in the majority would have a lot to learn from our minority brothers and sisters.

Most Christians acknowledge that Jesus was a friend of those marginalized because of gender, race, or social standing, those society had made 2nd (or even 3rd) class. A quick tour of the Gospels will provide numerous examples, including:

-The adulterous woman-One day, Jesus was teaching in the temple courts when a group of religious leaders brought in a woman who’d been caught in the act of adultery. They quoted the Law of Moses, saying she should be stoned to death.

In reality, though, Mosaic Law would have condemned both the man and the woman. But because these leaders had created a culture of inequity, they brought only the woman to Jesus.

Jesus took a stand for equality when He held men to the same standard and responded, “Let him who is without sin cast the first stone.” Not one of these teachers of the law or Pharisees was able to toss even a pebble at her (John 8: 1-11).

–The Samaritan leper-While Jesus was walking to Jerusalem, ten lepers cried out to Him from a distance (lepers were not allowed to interact with the healthy). They asked Him for healing. Though He healed all ten, only one returned to thank Jesus. He was a Samaritan.

Though Jews did not associate with Samaritans, this man’s character was applauded by Christ (Luke 17:11-19).

-Zacchaeus, the tax collector– Notoriously unscrupulous, tax collectors were ostracized by the religious leaders of Jesus’ day. Not only did Jesus initiate conversation with Zaccheus, but He invited Himself to dinner in Zacchaeus’ home! We must take note that while the pious crowd criticized Jesus for this socially risky friendship, Zacchaeus inherited salvation, made restitution times four for any dishonest gain he’d made, and voluntarily offered to give half of his possessions to the poor (Luke 19:1-10).

-Crippled woman in the temple—In Jesus’ day, Gentiles were allowed only in the outermost courts of the temple. The next level permitted Jews, including women, and the third area permitted only men to enter. This was not in accordance with God’s instructions for the building of the temple. Rather, it was tangible expression of a human-devised hierarchy.

But one day, when Jesus was teaching in the synagogue, He saw a crippled woman. He called her to Himself—into the area reserved for men—before laying hands on her and healing her. Her willingness to defy the culturally-accepted relegation of women to the outside resulted in her healing (Luke 13:10-13).

-Levi, another tax collector– Jesus called Levi from his tax-collecting booth and asked him to follow Him. Unlike the religious crowd, Levi “immediately” left his booth to follow Christ and even threw a party for him at his house. The religious Pharisees complained about Jesus associating with a bunch of sinners, but Jesus stated, “I came to call sinners to repentance”  (Matt. 9:9-13, Mark 2:13-17, Luke 5:27-32).

–The Parable of The Good Samaritan-When Jesus was asked by an expert in the law, “Who is my neighbor?” Jesus told a story in which three men, a priest, a Levite (a member of an esteemed Hebrew tribe who assisted the priests), and a Samaritan, all encountered a wounded man along the road. The Samaritan was the one to put aside the racial conflict between Samaritans and Jews to care for the man. He invested time, effort, and finances to see that the man would get well.

Christ deliberately made the Samaritan the hero of the story to illustrate that a neighbor is not one who looks like you, but one who demonstrates love (Luke 10:25-37).

-The bleeding woman—In Jewish culture, a menstruating woman was considered unclean. Can you imagine being socially distanced for 12 years? This woman not only had a physically depleting condition, but also the emotional turmoil of being considered an outcast by society. Desperate, she broke all the rules to push through a crowd to get to Jesus. She didn’t dare touch Him, but she hoped that if she could even touch the hem of His robe, she’d be healed.

When Jesus realized someone had touched Him, the woman became afraid. Would He be angry that she had made Him unclean? But Jesus rewarded her. While many in the crowd followed Jesus out of curiosity, this woman’s profound faith produced her healing (Matt. 9:20-22, Mark 5:24-34, Luke 8:42-48).

–Woman at the well-Christ’s longest one-on-one conversation recorded is with a woman who likely fit all possible categories of outcasts. She was female, Samaritan (a race despised by Jews), and known for her immoral behavior.

Jesus not only engaged this woman in conversation, but he confided to her first that He was the Messiah.

This woman immediately left the water jug she had gone to fill and began telling others about Jesus, the Christ (John 4:1-30).

-Christ’s genealogy-It cannot be without intention that God wove those who were typically disregarded by Jewish society—foreigners and sinners—into Jesus’ ancestry. The fact that women were mentioned in His lineage at all was shocking (Matthew 1:1-16)!

Jesus’ life was one of inclusion. He invested most in “outsiders.”

Conversely, His chastisements were typically reserved for those at the tippy top of the political and religious hierarchy (those exchanging money in the temple, the Pharisees He referred to as white-washed tombs, the rich young ruler who clung to his wealth and status, to name a few).

In fact, Paul was the only real insider God used to start the church. And before using him, God had to go to great lengths to strip Paul of all of his “credentials.” Paul had been born a “Jew among Jews” and had followed the letter of the Law, but he had to come to a place where he “considered it all garbage” in order to know Christ.

Why did Jesus seem to pursue those outside of privilege? Maybe they see more clearly the fallacies of the current world order and long more eagerly for a kingdom void of echelon.

Those born into a position favored by “the system” rarely take the time to critically examine it, but those who don’t benefit from the system are often able to identify its failings. This perspective prevents them from putting their hope in their own accolades, their reliance on the world, and their trust in the physical realm.

I lack this perspective as a Caucasian living in Indiana and can gain it only by knowing, listening to, and sharing life with friends whose cultures, experiences, and even skin look different from my own.

Yes, Jesus would agree that all lives matter. He doesn’t take our human constructs into account. But He specifically said He came to set the oppressed free and asked His followers to do the same.

This is why The Boaz Project defends the cause of the fatherless and stands in solidarity with others put at a disadvantage based on their race, status, health, etc.

We are promised that heaven will be populated by those from every tribe and nation. Until that day, we who are headed there should be the first to cry out for justice.

As you pray for The Boaz Project this month, please:

Ask God to bring a spirit of reconciliation to our nation, with the church leading the way.

Praise God that despite the spread of Covid-19 globally, all of our children and caregivers remain healthy.

Lift up in prayer our homes which continue to endure strict lock downs. Navigating quarantines with numerous children, distance learning, and grocery price increases is wearing on all of our partners.

Continue to ask God for wisdom as we modify programming to accommodate this new world of Covid-19-related accommodations.