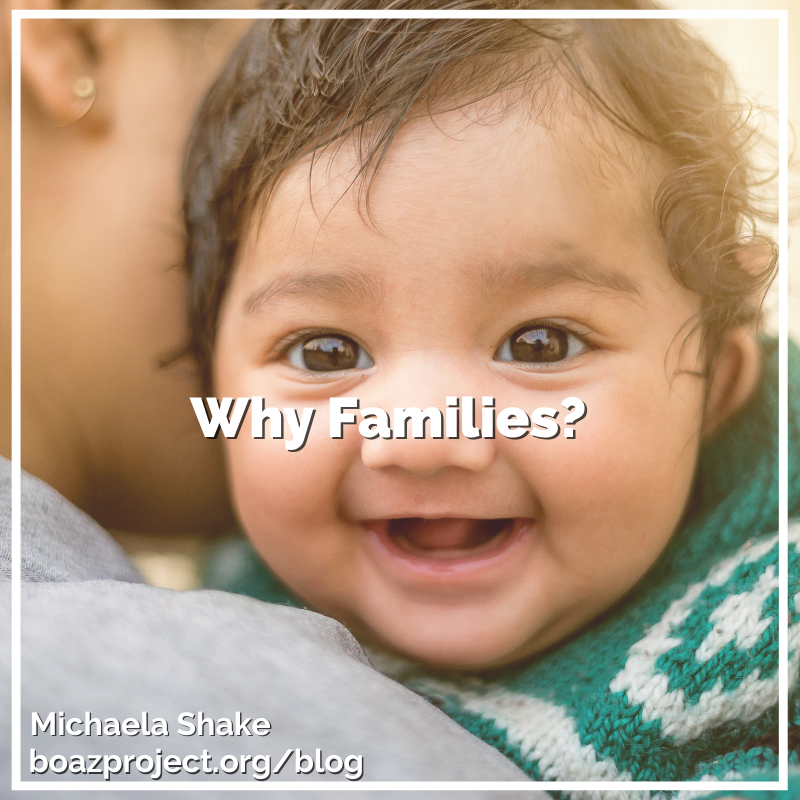 The vast needs of orphans around the world seem overwhelming. In the face of the staggering numbers of abandoned and maltreated children, large institutions can seem like the only possible solution to care for so many. However, this approach is no longer considered best practice. Instead, leaders in orphan care, including the World Health Organization and the United Nations, strongly recommend family-based care alternatives.

In this model, family support is used as the first line of defense but, when alternative care is needed, options such as kinship care (placing children with family and community members), fostering, and adoption are used. In fact, according to international law, one of the basic rights of a child is to live in a family. The UN’s declaration from the Convention on the Rights of the Child states, “…the child, for the full and harmonious development of his or her personality, should grow up in a family environment…” (United Nations, n.d.)

These decisions were not made on a whim. Decades of research has shown that children are wired to attach to a couple of caregivers and receive their primary love and support from those individuals. Ideally, those caregivers would be their birth parents, but there are many other solutions when birth parents are unwilling or unable to care for the child that are preferable to institutions. The important thing is that children are raised in warm families, in homes where they are treasured and loved, not in large groups with a rotating staff.

“A study in orphanages in Europe established that children (under the age of 3) placed in orphanages were at risk of harm in terms of attachment disorder, developmental delay (i.e., reaching developmental milestones and fine motor skills), and neural atrophy in the developing brain.” (Huynh, 2014, 1) This piece of research does not stand alone. Rather, it is one of a multitude. The evidence is overwhelming. Time and time again, science has shown that children were designed to form attachments in a family environment and that those attachments are essential to their social, emotional, and even physical development.

While Russia’s orphanage system, still recovering from its time under Stalin, has been known for many years to be abusive and cruel, studies like the London Study have shown that institutionalized children display more negative outcomes even in safer institutions with low staff to child ratios and an appropriate amount of toys and activities (Zeanah, 2000, 232).

The children in the London Study had also only spent two to four years in the institution at the time of the research. This is another factor that shows up over and over again in the literature. Children need not have been deprived of a family for the entirety of their childhood. Only a short time in an institution may have a negative impact on their ability to attach and develop appropriately.

This should not surprise Christians. While many faithful Christians and even heroes of the faith have cared for children in his manner through the centuries, God designed children to live in families. Psalm 68: 4-6a says, “Sing to God, sing in praise of his name, extol him who rides on the clouds; rejoice before him—his name is the Lord. A father to the fatherless, a defender of widows, is God in his holy dwelling. God sets the lonely in families…”

When we know better, we do better. That is why The Boaz Project’s mission statement is to “inspire leaders to care for orphans in their own communities.” The solution to the global orphan crisis is more Christians following God’s call to care for orphans, not a few people caring for many. Will you join us in praying that God will continue to raise up these people who are willing to follow His call?

P.S.–For more information on attachment research or anything else mentioned in this article, please leave a comment! I would love to point you towards resources.